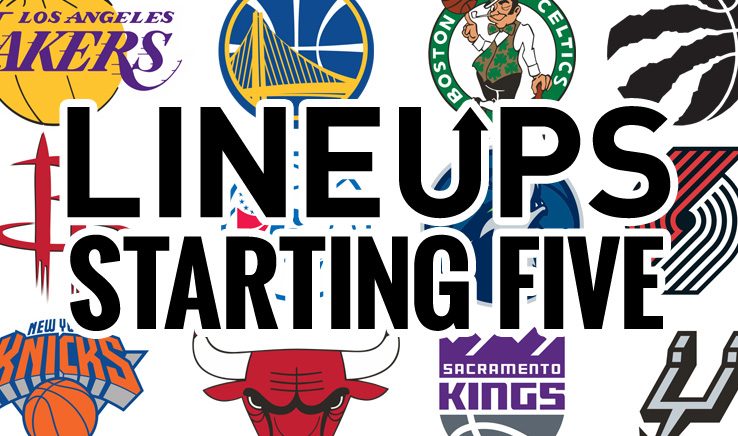 Tracking NBA starting lineups is a must for handicappers wanting to experience success.

Placing a bet on a team that isn’t playing with its superstar is like setting your money on fire in many cases.

Handicapping NBA games has become a little bit easier with the league’s rule change in 2019 regarding starting lineups. Prior to 2019, teams didn’t have to announce their starters until 10 minutes before the game.

With the rule change, teams must announce their starting lineups 30 minutes prior to tipoff. This is huge for bettors, but it is just one of many tools that can be used to improve winning percentage.

The reports include information about players that are not playing due to injury. Other players may be listed as questionable or probable, which makes checking that pre-game starting lineups even more important.

This season, it is even more important to check the injury reports because of COVID-19. The NBA has protocols in place should a player test positive for the virus. Players now miss a minimum of 10 days before they are able to return to play. The daily injury reports detail when a player is expected to return.

Reviewing injury reports can help bettors get in early on what they view as a value bet. Catching injury news just after it is released can open up a number of positive expected value wagers.

That can be the equivalent of a gold mine for bettors.

Introduced within the last several years is the idea of managing a player’s playing time. This season, managing players’ minutes will be even more crucial because of the number of games played on consecutive nights.

Kevin Durant, who entered the 2020-21 season coming off a torn Achilles tendon in 2019, is a great example of how a team manages a player’s load. Brooklyn was holding Durant out of the second game whenever the Nets played two games on consecutive nights.

The 76ers do the same with Joel Embiid and other players like LeBron James, James Harden, and Anthony Davis have all taken nights off in an effort to ensure they are fresh for bigger games and to help limit injuries.

For bettors, it is important to know when a team is going to rest a player. If Stephen Curry is not playing for Golden State, that is going to impact how you would wager on the Warriors, if you would wager at all. It is typical these days for NBA teams to rest their stars as often as possible when their teams play on consecutive nights.

When you place your NBA bet, you want to have the most accurate best information available in order to make a wager that is going to pay off. One of the key pieces of data that can help you improve your chances of NBA betting success is tracking NBA starting lineups.

Stay up on the injury reports, track players that may be resting on a given night, and check the final starting lineups a half hour before game time to ensure your winning bets.

Read our betting guide on buying points in the NBA.